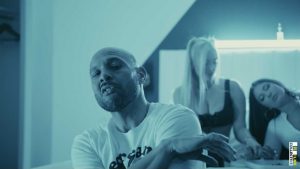 San Francisco rapper B3hree follows up the release of his new EP, TRUTH HURTS with the remix for his lead single “Run It Up” featuring Northwest Legend Cool Nutz and a rare verse from TOPE. Filmed in Portland, Oregon and directed by Diondre Collins – B3hree, Cool Nutz, and TOPE take time breaking down the methods to their hustling over the hard-hitting production provided by TOPE.
A true student of the game, B3hree first found his way in the music industry through artist development and management and has recently decided to step into the artist role highlighted by the January release of his new EP “Truth Hurts.” B3hree taps the legend Cool Nutz for a flawless appearance on “Run It Up,” as Cool Nutz shows why he has been a mainstay in the rap game for over 20 years with his unbreakable flow and A1 business ability to reinvent his sound while staying true to his brand time after time. Be on the lookout for Cool Nutz’s new project “Failure Is The Feeling” dropping March 26th on all digital streaming platforms! Rebranding himself as a producer, Portland/Oakland artist TOPE drops a rare verse on “Run It Up” and delivers more than a few memorable lines.
Be sure to subscribe to B3hree on Youtube as well as check out the launch of his new website B3HREE.COM for more information and updates on Truth Hurts and new releases dropping in 2021!