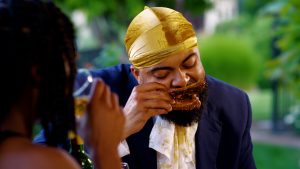 Seattle artist Macntaj announces the release of his new single and music video, “Love Me The Same” via Ingrooves Music Group
As the Pacific Northwest music scene explodes onto the radar of the music industry, new artist Macntaj has risen to the top of the fold with one of kind visuals, top-tier rapping abilities, and a hilarious personality to match.
Macntaj first raised eyebrows with the release of “Hood Burger” and the ensuing drama with Tory Lanez creating a suspiciously similar song and video for his “Bionk Boink” single, and has returned with another smash this time titled, “Love Me The Same.” The new single “Love Me The Same” showcases Macntaj’s radio-ready sound and is full of infectious melodies, big production, and engaging lyrics. Once again connecting with Director Justin Fricke, Macntaj and his team show their range and capabilities as a production team with the latest release, “Love Me The Same.” With this being his first official release via Ingrooves Music Group it’s clear to see, Team Taj is ready for the big leagues in 2021.
Watch the Official Music Video for “Love Me The Same” and be sure to follow Macntaj on Instagram and Twitter for more updates!