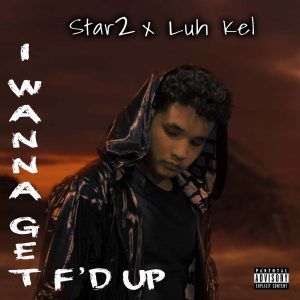 “I Wanna Get F’d Up” conveys the message of heartbreak, loss, and disillusionment.  Star2 confides, “”I wanted to write a song with the backstory of the best relationship of your life that blows up out of nowhere leaving you wondering what happened- leaving you in pain and wanting to self-medicate. It was a dream come true to do a song with Luh Kel, my dude. Our song is the diary of a toxic relationship with a toxic shawty you loved heart and soul who cheated. Even though it’s hard because you really love that one person – there is at least one time for everyone when after a breakup you just want to be gone – gone from the universe.”

In the accompanying video for “I Wanna Get F’d Up,” Star2 and Luh Kel replay the song’s narrative using imaginative imagery complete with CGI and brilliant, post-apocalyptic landscapes. Star2 adds, “Making this video with Luh Kel was dope as hell.  We used CGI (computer-generated imagery) with a green screen to make Luh Kel’s car fly and to make me fall hundreds of feet backwards off a cliff into the ocean – swimming underwater.”

Star2 is an artist who seamlessly blends pop, R&B, and hip-hop for an enthralling immersion of sound. Raised in inauspicious circumstances and born into a refugee camp in Thailand, Star2 takes influence from overcoming his life struggles, creating music that is bold, high-spirited, and soulful.