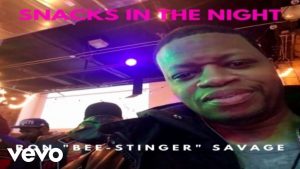 Ron Savage aka Bee-Stinger delivers visuals for his recently released single titled “Snacks In The Night.” The former member of the New York State Democratic Committee, Civil Rights Advocate, and owner of the Hip Hop Movement lays in on clout chasers and lyrical clowns who taint the elements of Hip Hop and the culture.

Over gritty production, Stinger goes hard with iron punchlines to address the lack of respect displayed by some up-and-coming artists. However, amid his lyrical venom, he does take the time to pay respect to the Hip Hop OG’s who continue to put out music and live a lifestyle true to the culture. For anyone else, he’s geared up taking them out just like snacks in the night…

Watch “Snacks In The Night” and connect with Bee-Stinger and the Hip Hop Movement below.

Head over to YouTube to catch Bee-Stinger’s other latest videos “Drop Low” and “The Monty Diss Track.”

Hip is the Culture Hop is the Movement