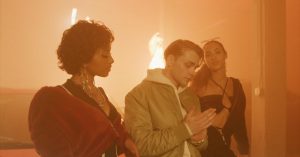 NY rising star Jake James released his high-energy new single “High Grade” with the accompanying visual via Encore Music Group. On the new single, Jake channels rock influences and describes the highs and lows of his new lifestyle and the pitfalls of chasing stardom. Fresh off the release of Jake’s debut EP, Letter Of Intent, the new melodic single is a change of pace from his signature New York boom-bap leaning sound, highlighting his versatility and range as an artist.