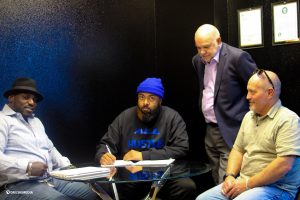 Bloc Star Evolution/INgrooves/UMG has announced the signing of Sacramento/Seattle rapper Macntaj to a Multi-Album, 7-Figure Publishing/Admin Deal.
Not many artists have been as prolific as Sacramento / Seattle rapper Macntaj over the past few years with a consistent string of top-tier music videos and singles that never miss the mark. Putting together a team of producers, videographers, and overall visionaries Macntaj has shown his work ethic and dedication to putting out well-crafted hits, followed by out-of-this-world visuals is like no other. Macntaj recently caught the attention of the world with the release of his music video Hood Burger and the not-so-coincidental release of Tory Lanez’s similarly styled visual Boink, Boink. Not letting any controversy stop him, Macntaj has proved he is an artist that is here to stay with a bright future ahead of him with the release of his latest music video “Love Me The Same”
“As an artist transitioning into an executive, it’s important for me that I put other artists in situations that I would have wanted for myself. It’s special for me that Macntaj believes in us. He’s going to do something significant in this industry. I feel it in my bones. I can’t wait for everyone to hear what we’ve been working on,” says legendary West Coast rapper X-Raided the Founder & CEO of Bloc Star Evolution.
Macntaj himself explained what this deal means to him and his future, “I always believed in myself, always believed my brand offered something different. I’ve had fans from all over the world reiterate that to me, lengthy messages about how my music has changed their life and got them through hard times. I’ve never claimed to be anything that I wasn’t. Everything I put in my music is my REAL life, and nobody else’s. The good, the ugly, and the bad. I want to show the kids that feel like the world is against them that they CAN do it. Use your discomfort for fuel. I’m far from the saint but the only thing I love doing more than creating content is inspiring the youth.”
A special thank you to Anerae Brown , Connor X Lorenz, Lara Lavi-Jones, Jackson Morgan, Ben Ryweck and Jimmy Bako
Be sure to follow Macntaj on Instagram, Twitter, YouTube, and Facebook for more updates on this rising star’s career.
Watch Macntaj – Love Me The Same