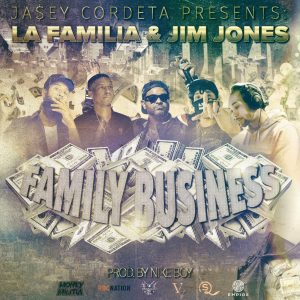 Prominent Portland Oregon Hip Hip group “La Familia” release a classic street anthem with Harlem New York’s own Jim Jones. “Family Business” was produced by New Mexico producer Nike Boy, accompanied by a plethora of different styles both melodic and bar-heavy verses from Timmi HendriXXX, Jasey Cordeta, and Swiggle Mandela.
Jasey and his brother Swiggle Mandela had the opportunity to meet the CEO of vamp life himself Jim Jones when he came to Portland to do a sold-out show. Since then Jasey had begun building with Jim Jones’s team and eventually would solidify the feature.
The record means a lot to the city of Portland because it is not common for artists from the city to work with entertainers at that level of someone like Jim Jones who had an extensive career with Dipset and is now with Roc Nation.
This record has west coast influence, southwest production with a New York drill vibe and it is a must-hear, and puts Portland on a much bigger and much-deserved platform.