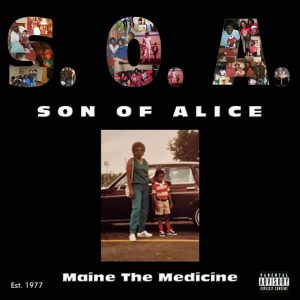 Hip Hop vet Maine The Medicine recently released an emotive album dedicated to his late mother titled ‘S.O.A. (Son Of Alice).’ In the interview below he discusses the album’s vulnerability and transparency, as well as the creation from thought process to final product.

MJ: I see you and Leadgeon are still going strong, talk a little bit about that chemistry.

Maine: Well with Leadgeon, that’s 30-year chemistry and brotherhood. I don’t have to tell him what kind of beats I need, he already knows. Now lyrically we always push each other with the pen. For us, that inner competition will always be there.

MJ: One thing I find when it comes to your albums it’s difficult to pinpoint one or even two favorite records. All your albums are theme-based and flow like a story from beginning to end, with no skipping. However, I do want to touch on “Pour Liquor” as that seems to hit hard and hit home with many fans and listeners.

Maine: Yes, “Pour Liquor” seems to be a popular one with the fans. I wrote that hook during the Covid,  because of all the friends and family I lost that year. I hadn’t gotten a chance to write a verse to it until the night of my dad’s funeral. I was already halfway through the album, but I needed to pay homage to my father. As for the feature, that’s my cousin Khali Hustle from the Bay Area. He, like myself, lost a few people, and almost lost his own life to an attempted murderer. So, I’m grateful he’s still here to jump on this record with me.

MJ: I want to take a moment to pull on heartstrings and ask how difficult it was to create “Momma” and the array of emotions you must feel hearing that song being played.

Maine: Yes, that song was hard to make, and at times was hard to listen to. My mom was my everything, and that void will never be filled. She was a single mom, worked 2 jobs, and tried her best to provide for my sister and me. She was a big fan of my music, even though she said I curse too much. But she would love to watch my videos on YouTube. So, I just wanted to honor her with this album, and make her proud. Maybe one day I can compose myself enough to perform it.

MJ: Both as a fan and professional in the music industry, I must say how refreshing it is to experience your growth as a man and artist with each album you release. There’s a manner in which you invite the world into your personal life experiences that allows us to authentically embrace and grip your emotions. Your use of lyricism and wordplay flows effortlessly over boom-bap cadences. What is it about Maine The Medicine that stands out from other artists?

Maine: I just try to be the best version of myself. I move off of the emotion and the vibe of the beat. Sure I have topics that I want to address,  but instead of forcing I wait for the right track to bring it out of me. I also know as an artist I can always get better. I can always make my sword sharper. I never convince myself that I made it because that can go to your head. I want to continue to keep that hunger for more.

MJ: Take us behind the scenes of the album ‘S.O.A.’  Let us in from the inspiration to creation to the final product. I know the album is buzzing with a social media frenzy and fans are listening on repeat with genuine compassion.

Maine: The creative part was fun and therapeutic for me. I mean, of course, it was some pressure because this album is dedicated to my mom. But at the same time, that’s what helped it flow. When I was listening to the tracks, I was thinking who could’ve made this dope? There are so many dope artists I know that I hadn’t worked with yet, so I wanted to link with them on this album. Plus I got the few staples that are always on my albums like Leadgeon, Suspect,  and Tysoul. But I listened to this album about a hundred times to make sure it gave me the same feeling as the first time. I can honestly say it most certainly did.

MJ: What is your secret to being able to stay afloat and create timeless music? In an era where music seems to fall into an abyss of one-hit wonders and what’s trending, there must be some challenges.

Maine: I make music on how I feel and the vibe the beat gives me. I put my all into my music, and I’m not afraid of being vulnerable about my life. I think artists fail when they force a hit or try to sound like what’s hot. The best thing to do is to let the music come naturally. In the process sometimes you end up with a hit that you didn’t know was going to be a hit.

MJ: I’m not sure what can top ‘S.O.A.’ but can you give us some inside scoop on other projects or endeavors you’re working on?

Maine: It’s going to be really hard to top ‘S.O.A.’ but I’m not really sure that I want to. Because it’s such a special album, I wouldn’t mind if this is my “Illmatic.” No album I do after this will ever be as special as this one. As for future projects, I will stick to the same formula I have been using and let the mood and the beat take me on a journey. I have a few projects coming up, like the Mercy Gang EP and an EP titled ‘Iron Horse Talk.’ Leadgeon and I have an EP as well. But for now, I’m just pushing the ‘S.O.A.’ album, and the tee shirt line we’re working on with Electric Frog Designs.

MJ: As we wrap up, take this time to let the world and fans know anything else about the album or Maine The Medicine

Maine: I want people to know that I put a lot of time and emotion into this album. I’m super honored about the response I’m getting off ‘S.O.A.’  The love and support make me feel like I succeeded in making my mama proud. The thing I want people to know about Maine is I love being creative. I’m going to always try to give you something different.