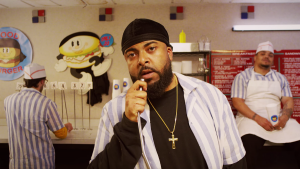 Tory Lanez’s name has been in all sorts of controversy in 2020, and he might just be ending it with a little more. The recent release of Tory’s new music video “Boink, Boink” shows some eerily similar shots and concepts as underground Seattle artist Macntaj’s new video Hood Burger. From the burger shop design to the tight-fish lense solo shots, it’s easy to see the similarities with one watch. But it goes deeper, “Boink, Boink” is directed by Joshua Valle who works for Blank Square Media which is founded by Edgar Esteves – the same producer who was accused of stealing Polish group RYSY video concept for Russ’ single “Losin Control.” We also have reason to believe Edgar and Joshua have both seen the director of Hood Burger – Justin Frick’s work on multiple occasions.
It’s no secret to any fans of Seattle Hip Hop that Macntaj has been dropping incredible videos all year even throughout a pandemic, and this all wouldn’t be the first time a larger artist has lifted concepts from someone smaller and expected to not be caught. Did Tory Lanez director lift this the concept for their recent video from Seattle artist Macntaj, or is it all coincidence?
Macntaj – Hood Burger (dir. Justin Frick) https://www.youtube.com/watch?v=8gDwNW_fLVE
Tory Lanez, Rich The Kid, VV$ Ken – Oink Oink (dir. Joshua Valle) https://www.youtube.com/watch?v=QR_qovfzSPg