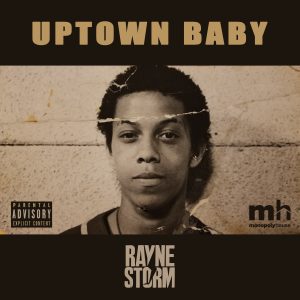 The long-awaited debut album from Rayne Storm is finally here! The Harlem, New York City repping rapper and producer has unleashed the monster 23 track project “Uptown Baby”.
The album features all production by Rayne Storm and appearances from New York legends like Herb McGruff (Big L, Ma$e, Cam’ron) & Pudgee The Phat Bastard (The Notorious B.I.G., Tupac Shakur, Lisa ‘Lefteye’ Lopes, Rakim), new school staples like Stan Spit (Big L) & Mickey Factz (Drake, Lupe Fiasco) and indie stars like Decadez, Kony Brooks, Verse Akalp, Phoenixx, Dizzy $padez and more.
Initially known for the 2006 mixtape “Storms Coming”, it has been a long time coming for Rayne who has released this new album through his own independent label, Monopolyhouse. The project features all sample-free music, as Rayne has managed to create his own original soundscape. The music sounds familiar but brand new at the same time. A combination of classic Hip-Hop with a futuristic twist. Every song on the album was released as a single, one of the few, if ever albums to do so. “Uptown Baby” is a must-hear as it offers a wide spectrum of rap music for a multitude of tastes.
Hyperlink: https://distrokid.com/hyperfollow/raynestorm/uptown-baby