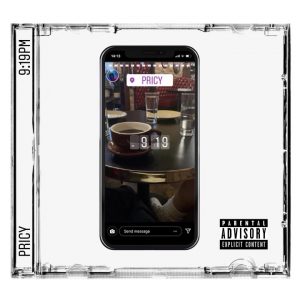 Portland rapper Pricy releases his new album “9:19 PM” available now on Apple Music, Spotify, Tidal, and more!
His second album of 2022, Pricy returns after releasing “No Game, No Glory” with producer TOPE and shows he’s playing no games with the music industry this year either. Pricy shows his versatility and work ethic by producing every song on “9:19 pm” himself and handling every verse himself as well, with zero features on his new project. Typically known for his top-tier wordplay and laid-back flow, Pricy also shows his ear for music and samples on “9:19 pm” bridging the gap between 80’s funk classics and 70’s soul anthems to lay down his sonic pallet.
Recorded in Portland, Or with legendary engineer Zebulon Dak, Pricy pays tribute to The Rose City like few can, with hometown references and nods only a long time local would know. Pricy also shows love to his second home, The Bay Area, with his Official Music Video for “Flamingos” and subtle nods to San Francisco in his lyrics. Documenting his life throughout his raps, Pricy pieces together his words like scenes from a movie giving his lyrics a visual approach by painting a vivid picture through his writing. Overall “9:19 pm” is a project filled with cultural references, throwback nostalgic clips, and enough game to make you rewind each song to make sure you catch it all. With “No Game, No Game” being his debut album, “9:19 pm” is the second of 4 projects planned to drop from Pricy in 2022.
Be sure to tap in with Pricy on YouTube for the Official Music Videos for “Street Lights,” “Talk Nice/Airplane Mode” & “Flamingos” all shot by Collective Films LLC. Press play on the new album “9:19 pm” below on Apple Music, Tidal, Spotify, and more!