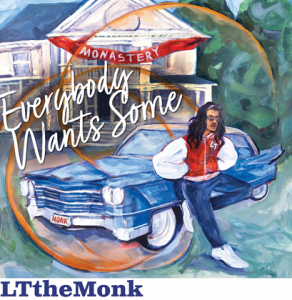 Today Hamilton-based, London (UK) born and bred rapper LTtheMonk releases the first single from his album On The Wall available August 20th on indie powerhouse label Sonic Unyon Records (Hayden, Sloan). “Everybody Wants Some” is the first single from his forthcoming concept album that references filmmaker Spike Lee’s Do The Right Thing and the late iconic singer Michael Jackson’s Off The Wall, his favorite movie and album respectively. ‘Everybody Wants Some’ was inspired by Richard Linklater’s 2016 movie of the same name, revolving around a freshman’s first days at an American college in 1980, as the freshman tries to focus on his baseball scholarship, yet is often distracted by relationships and partying. Subtracting baseball for music, LT details his first days at college in Hamilton in 2017, aiming to focus on his music and performing, yet from the first day of Orientation, romance is commanding his attention. The compelling video for “Everybody Wants Some” was directed by Because Design Matters.