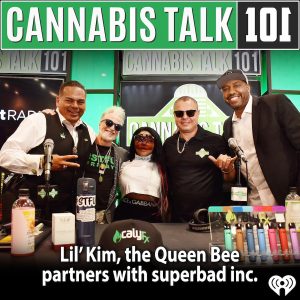 Cannabis Talk 101, the world’s #1 source for everything cannabis, today announced the release of the newest episode from their critically-acclaimed podcast series featuring an exclusive interview with iconic New York rap artist, actress, model, and reality television star Lil’ Kim.
The episode features Cannabis Talk 101 hosts Chris ‘Blue’ Wright, Joe Grande, and Marc Wasserman of The Pot Brothers at Law interviewing Lil’ Kim alongside Los Angeles cannabis mogul Carlos Dew. Dew is the Founder of Superbad Inc., President of Vertical Companies, and is the driving force behind Lil’ Kim’s new cannabis product, Aphrodisiac.
In the interview, Lil’ Kim doesn’t hold back when Joe Grande asks, “if you could smoke cannabis with anyone, dead or alive, who would it be and why?”

Lil’ Kim’s response, “Ooh… Definitely Nipsey… Cuz he was the realest. He was just so cool and like, I could just imagine a conversation with him, know what I’m sayin’.”

Listen to the full episode on IheartRadio or watch on Youtube here.