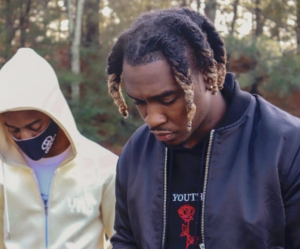 Haitian recording artist Inkcudi drops his new single and video “Trackhawk.” The song is rapid and addicting as Inkcudi raps about the lifestyle he lives when making moves in his Trackhawk.
Inkcudi is always staying consistent with his music and leveling up every change he gets. Influenced by artists such as Kid Cudi, Lil Wayne, DJ Khaled, Drake, and P.Diddy, Inkcudi describes his sound as self motivating. When listeners hear his music, it makes them want to be a better version of themselves. Inkcudi is inspired by taking chances while eagerly awaiting where life takes him. He encourages his listeners that as long as you work hard and stay committed, all your dreams will come true. Inkcudi’s first projects “CTTH” and “Gleece Wrld” were both directed by FNO productions. He also released “No Pwess” directed by BMarron and shot by “DakMagic”. Currently promoting his single “Cant Prolong”, Inkcudi’s new single is a motivational anthem about moving on from procrastination and finding yourself. Inkcudi will also be performing at Holyshift Fest on August 28, 2021