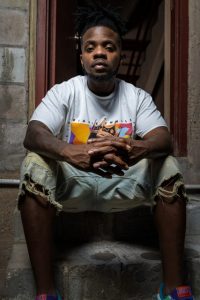 For over a decade Jay Lyriq has been the music industry’s most powerful weapon. He came in
swinging as a songwriter and eventually took a step forward to be the face of his music. His
talent has got him next to the industry’s most powerful musicians as well as crowning him a multi-platinum and multi-gold award-winning singer and songwriter. You might’ve heard him
through his frequent collaborations with artist T-Pain or the “Jay Leno Show, The Jimmy Kimmel
Show, 50th Grammy Awards Show. Jay-Lyriq’s vocals proceeded to be featured on T-Pain’s
Epiphany & Three Ringz, along with co-writing accreditation for songs entitled “Tallahassee
Love, 69, Tipsy, and Reality Show.” As Jay-Lyriq talent progressed he co-wrote and performed
for the movie, “Step Up 2” featured song, “In the Club” Jay -Lyriq has teamed up with T-Pain
co-writing the new single “UP DOWN”. He has worked with Grammy, Platinum, Gold award
winning producers and artists such as Jim Johnson, Dave “Preach” Balfor, T -Pain, Jimi Kendrix,
Geo Hall, Luxx Durty, Don Destin, Musiq SoulChild , Raheem DeVaughn , Sammie, Yung Joc,
T-Pain, MYA, Trey Songs, Usher, Bow Wow, Tay Dizm, Sophia Fresh, Flo -Rida, Chilli (TLC),
Short Mack, Gorilla Joe Young, and Don Dinero, just to name a few.
Jay’s music journey doesn’t end in the early 2000’s though. These days his name is still
circulating on the internet and his fans are always craving new music from him. As an independent
solo R&B artist Jay Lyriq’s hard work is paying off. His single “Summertime” featuring Tay Dizm
has over 110K views and is produced by Geo Hall. “She different” produced by RD Muzik and
Big Hack has reached over 50k views. Jay Lyriq is currently working on his upcoming EP. We
recently had the pleasure of speaking with the music icon and we have the full interview here.
Check it out!

Hey Jay, how are you doing? So what are we promoting this time around? I know you’ve
been in the game for so long and it’s so good to hear that you are still going hard.
Yeah, The “Summertime” record and “She Different” record. It has over 20,000 views on it. I also
have a lyric video that has 54,000 views. So people are really checking for my music. We are
really just pushing. We are working on the EP and working with different artists. I actually had a
session in Nashville yesterday so I am really grinding.

Why do you think that you’re getting a lot of views and you’re getting a lot of streams for
these songs now? Why do you think people are gravitating to it? And how are you able to
still capture the hearts of people that are fans of you?
I mean I think it’s because people know I did records with Pain and I have people who followed
me throughout my whole journey since I first started. I’ve been doing this for so long. For the
most part, I am starting to get recognition and I am just now getting plaques. People really didn’t
know about my work because I was in the background.
Facts, and I completely believe that you were a pioneer when it comes to creating the
sound that we have today.

Because you said you’ve been in this game for over 18 years,
how are you responding to the new artists out there?

Oh, I love it. I love what they have been doing. It’s different. To have longevity in this game you
have to adapt. Artists are sampling different people and they are mixing the old school with the
new school. I think it’s extremely creative and you gotta be creative with what’s going on right
now. You know? So I’m, I’m a fan of it, you know what I mean? And I’m just, I’m just happy to
still be here and be in it.

Do you still have a relationship with T-Pain?
Man! I haven’t spoken to him in a couple years but we are good. I see he is working all the time
and he has a bunch of different other things going on. I just saw that he’s on tour. I wish him
continued success and I know he wants the same for me. I know one day we will come back
around again.

What’s next?
I just want people to vibe with me. I definitely want to get on some of these tours or something. I
definitely wanna get on some of these tours coming up this summer. I can’t say who I am
working with right now because I don’t want to jinx it.
Congratulations to you for even still being able to keep your name throughout all these
years.

I appreciate that. Like I said we were 17 years old. We jumped out not knowing what was in
store. Just being able to do that and go through the changes is what’s really important. People
are not always going to believe in your vision. It is up to you to paint that picture to make them
understand. Sometimes you will have to compromise, but you should be unapologetic about
who you are and your artistry. Invest in yourself and you shouldn’t care what anyone thinks.
You can follow Jay Lyriq on all things @Jaylyriq850
Also, check out his Youtube channel!